One of the things I love most about writing for this blog is the stories we get to share with our friends, fans, and fellow bakers. It's great to connect with folks who share a love of the same things that make you glad to get up and come to work every day. Baking, cooking, and food are a big part of my life, and sharing that with others each day makes for a satisfying and rewarding day at the office. But what about at home?

From reading other posts, you may know that my husband David and I share a love of cooking together, but the story really goes much deeper than that. You see, David and I have known each other for 41 years now (and I just turned 41!). I like to say we first met in a cradle.

In fact, our mothers were friends when they were teens, and remain friends to this day. David's parents were married first, and when my parents were wed, my mother borrowed her wedding dress from David's mother, Barbara. When the children started arriving, David's sister Kim was the oldest, followed by my brother Andy, then David, followed by my brother Mark, and then me.

As we grew up, our families remained in touch, though we lived in different states. A few times a year we would travel to their house in rural New Hampshire, a world away from our small city apartment in Massachusetts. There would be romping in the woods, sledding, sugaring, cidering, and lots of food. I remember big spaghetti dinners, build-your-own-sandwich lunches, David's father's chili (“it'll burn the lint out of your navel”) and my mother's cherry cheesecake.

As teens, we added various friends—boyfriends and girlfriends—to the mix. Relationships came and went, but our gatherings continued to feature food as a major player. Like going out for Chinese food on New Year's Eve. And sneaking out of Kim's wedding reception to go to Athens Pizza in our finery. (Hey, the hors d'oeuvres were tiny, and we were staving! Sorry Kim!)

At long last, the year I graduated from college, David and I realized our friendship was developing into something more. Even our courtship was marked with special food occasions. The brunch at the Columbia River Gorge; the truly laughable dinner at Benihana where I mistook the teacup for a finger bowl, and so many more.

As we spent more time together as a couple, we learned we each loved to cook; and we often cooked together on weekends.  I don't remember exactly when David suggested bread pudding for dessert, but I remember thinking it sounded just awful. I was picturing pieces of bread mixed in with Jell-O pudding and wanted no part of it. David's mom whipped one up anyway, and I was cajoled into trying it. Needless to say, another love blossomed that day; and I've been a fan of bread pudding ever since.

As love evolves, so do recipes. Our bread pudding used to be made with store-bought white bread, then we made it with homemade bread. One day a couple of years ago I heard of a recipe using doughnuts instead of bread, and just had to give it a try. Need I say I fell in love all over again? So join me, and we'll make doughnut bread pudding.

First, you'll need some doughnuts. After an unfortunate run-in with my bathroom scale, I chose baked doughnuts for my first batch. You can certainly use fried, or even doughnut holes. More on that later.

I started with our King Arthur apple cinnamon doughnut mix. 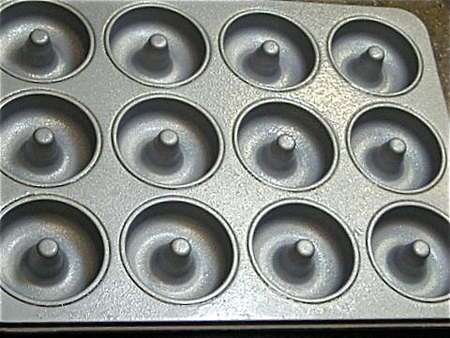 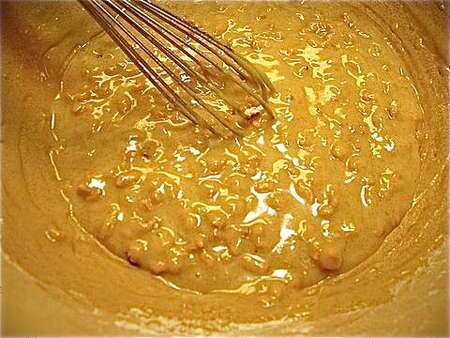 Notice the lovely chunks of apple in the mix. Those will add extra flavor and texture. 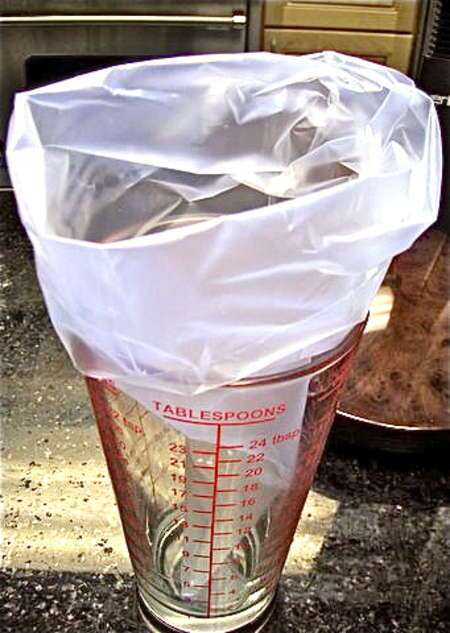 It's tough to spoon batter into doughnut-shaped wells. A pastry bag makes quick work of it. Use a tall, heavy glass to hold your bag open for you. 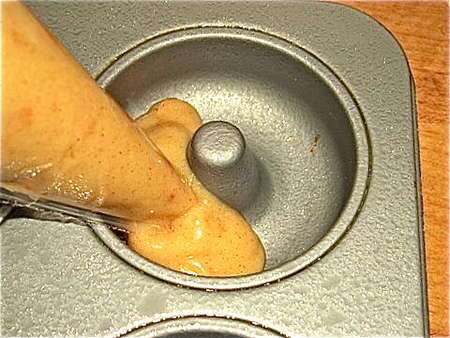 Snip off the end of the bag enough so the apple pieces will pass through. Gently squeeze and fill up the wells. 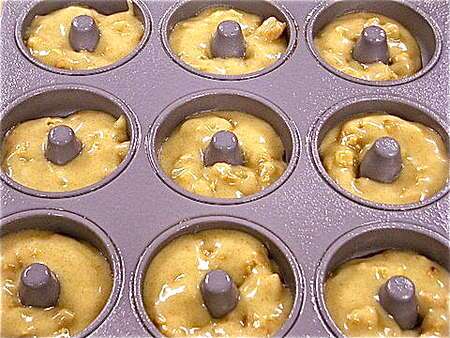 See? All full and no mess.  Bake the doughnuts for 8 to 10 minutes. Remove from the pan and cool on a rack. 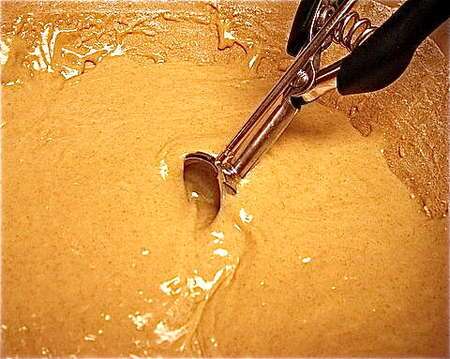 In an effort to be fair to our fried food fans, here's a quick rundown on making fried doughnut holes. For a really thorough explanation, see PJ's Doughnut Holes blog. Here's the cinnamon batter. 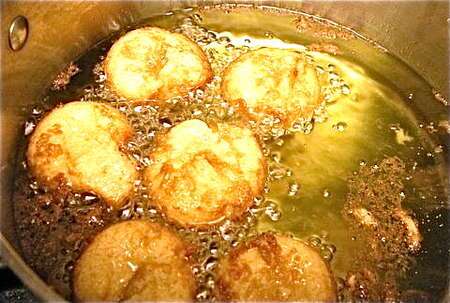 Remember not to overcrowd your fryer. You want a nice steady temperature for even frying. Drain the fried doughnuts well on a rack. 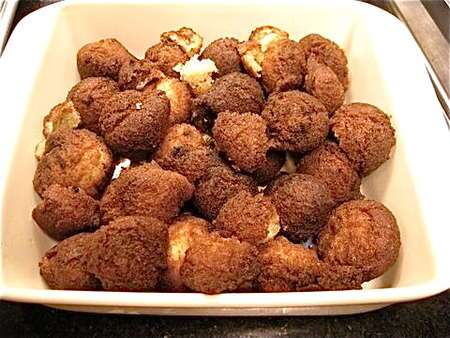 When you place the doughnut holes in the pan, you should have one complete layer on the bottom, and some extras tucked down in the gaps. It's fine to break them up a bit, just not too much or the pudding texture will be mushy. Keep most of the lovely fried bits whole.

Back to our baked doughnuts. 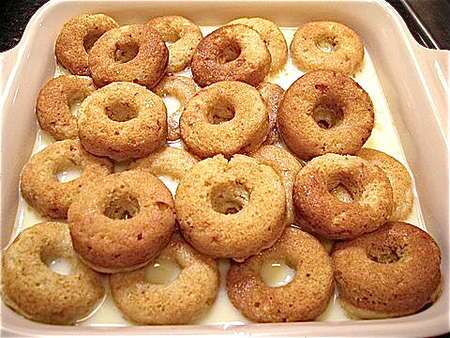 Butter or spray your baking dish, and layer the doughnuts in. Again, you're looking for a full bottom layer and some extra pieces on top.

It's best to keep the baked doughnuts whole. They'll get grainy in the pudding if broken up. Whisk together the custard ingredients and pour evenly over the doughnuts. 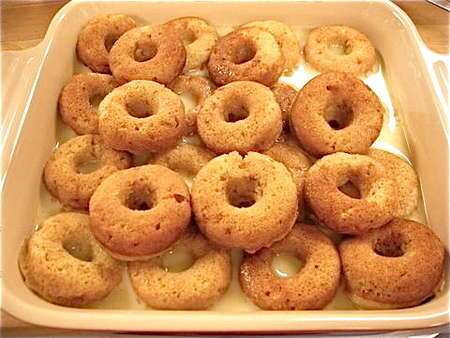 It's a subtle difference, but you can see in this photo that the doughnuts have absorbed some of the custard in just a minute or two. You can gently press the doughnuts down to help this along. Now, into the hot oven. 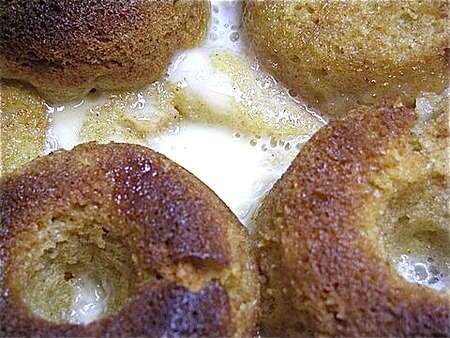 To check for doneness, take a look at the custard. This still looks a little milky, and isn't set. Back to the hot box. 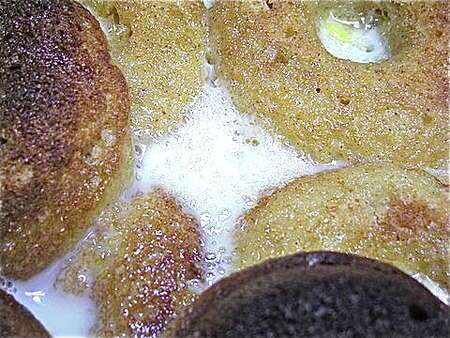 Success! The custard is set, the doughnuts are GBD (golden brown and delicious). Now the hard part, waiting 15 minutes for it to cool before serving! 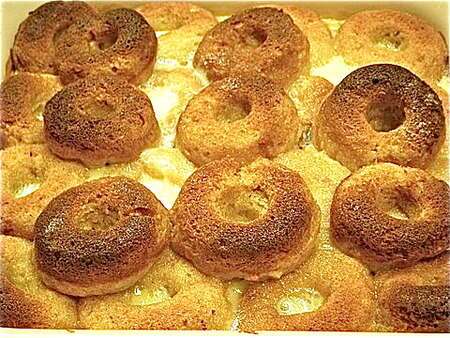 The results are worth the wait. Enjoy your delicious treat with whipped cream, ice cream, or even a drizzle of caramel sauce for the truly decadent.

Thanks for letting me share my love story with you. I'll keep you posted as we evolve for another 41 years!

Very Nice Post. I love it. Have a Great day. Thanks for sharing! Happy Baking. ~ MaryJane
I KNEW I wasn't crazy. my very, very first experience with bread pudding was one made in a chinese bakery in san francisco, from day-old glazed yeast donuts. it was solid... but solid comfort. since then, it's seemed like an impossible dream of a sugary high. maybe not!
Yet again you make my mouth water. I need a few more hours in my day to do all of the baking projects lining up... As one of the crazy college friends who has watched both of your Love stories evolve firsthand, I am amazed any of our scales are talking to us. PS had Athens pizza last week!! Hmmm road trip anyone?
Can you bake a yeast raised doughnut or does it have to be a baking powder base? Could you cut them with a English muffin cutter and fill them? Hmmmm..... Yeast raised doughnuts work for bread pudding as well. Experiment, have fun. Frank from KAF.
I made donuts for a living one brief season at apple orchard I worked in and all it was mix and water. We measured the mix out by weight for it was in 25lb bags. But it looked like your pictures when mixed and they were fried! We had this neat machine that dropped them in the oil and flipped them when it was time. Anyway those who think the batter looks to runny fry it don't look to me. You could always add less liquid if you think so. Also my mother use to have this cone shape cup like with plunger that shot out the donut mix kind of like the big professional one we used at the bakery/store at the orchard. Not sure if you carry them or if they are still made and sold anywhere.
I have 2 of your regular-sized doughnut pans. I have tried the baked doughnut reicpe three or four times and they always come out dry and tough. I have checked my oven temperature and it seems to be correct. I used KAF all-purpose flour. What else can I try to make the doughnuts come out a little less tough and dry? I suggest trying pastry flour. It is softer and will give a much more tender baked doughnut. If the doughnuts remain dry after this adjustment, you might try increasing the oil by 1-2 teaspoons. Frank from KAF.
Oh my goodness that looks completely amazing I want to eat my computer screen! I love bread pudding, especially when it gets a bit crispy around the top exposed edges! Those crispy bits are David's favorite. I like the tender, almost soggy parts. Again, we make a good pair! ~ MaryJane
I would like to by your donut baking pans, but would like to make my own cake donuts. Do you have a recipe for baked cake donuts? Right here, Maxine - Baked Doughnuts. Have fun! PJH
That's a lovely story, but I've read to the bottom of the comments and I'm still wiping my eyes over the bit about using a teacup for a fingerbowl at the Benihana. I don't know why, but that image is just hysterical! You're a charming story-teller. Hi Nel, Yes, it was quite a dinner. David launched his spoon onto a neighboring table, the chef served me raw meat as a joke, it went on and on. Once in a while if we are out for Chinese food, he will say "pass me your fingerbowl, and I'll pour you some tea". Glad you got a good giggle! ~ MaryJane
I love the doughnut pan. I'm thinking about getting a 2nd one but I don't use it often enough to justify it yet. now if I get the mini pan that just might work. The kids love helping me decorate the doughnuts. and I love the idea of a piping bag. This would have been perfect for the Dessert Revel last weekend. Jennifer OH Jennifer, I must know more about this Dessert Revel of which you speak! Please email me if you care to share. maryjane.robbins@kingarthurflour.com ~ MaryJane

A classic for all occasions