Live from the Coupe

American bakers at the “bread-baking Olympics”

The American team awaits the results in suspense...

Jeffrey Hamelman, director of the King Arthur Flour Bakery, is also a hard-working coach of the United States team that just finished competing at La Coupe du Monde de la Boulangerie, the “bread baking Olympics,” in France. This is Jeff’s report from Paris. Note: All photos courtesy of Jeffrey Hamelman and Brinna Sands.

March 29, Day One
As the train emptied out at the Parc des Expositions, hundreds of people from dozens of countries flowed toward the convention center. Europain—the great French baking trade show that takes place in Paris every three years, showcasing the finest in European baking equipment, ingredients, products, and baking schools—was just beginning. And for many of the attendees, the most compelling part of the coming days was La Coupe du Monde de la Boulangerie, the foremost baking competition in the world.

Twelve countries—France, the Netherlands, Japan, the United States, Turkey, Mexico, Taiwan, Argentina, Poland, Sweden, Spain, and Italy—each sent three of their finest bakers to stand on the world stage of baking. And over the course of three days, these bakers would present their finest work and hope for a chance to stand on the podium as one of the world’s greatest.

Baguettes and specialty breads, viennoiserie, and artistic design are the three areas of competition, and in an 8-hour period, a monumental array of products must be produced and displayed for the seven judges, professionals chosen from countries that are not competing in the Coupe.

The competition began briskly, and the expectations were high, as the three top-placing countries from the 2005 Coupe du Monde—the United States, Japan, and France—were competing. Rounding out the field for the day was Holland. As each day progresses during the Coupe competition, it can be hard to ascertain how the individual countries are faring. First, because there’s a staggered start to the day, which can make it difficult to get a sense of how each country’s timing is going. And second, because schedules vary considerably—for example, one country may be dividing their baguettes at the beginning of the 4th hour, some at the beginning of the 5th hour.

In any event, there is something (not foolproof by any means, but often a pretty accurate barometer) that often reveals how things are going: just look at the faces. As each hour comes and goes, the level of strain, ease, desperation, confidence, teamwork, and everything in between is revealed—subtly or not—on the faces of the competitors.

After thousands of hours and hundreds of days of single-focused dedication to the individual and collective work, the final day has arrived, and now there are 8 short hours left to perform the drill one last time. And it’s the only time that counts.

There have been times in the past when a competitor has had a disastrous event befall his or her work partway through the day. No matter, in spite of the inner recognition among all the teammates that there is no hope for winning, the work must continue until the final bell. And there have been days as well when a team knows that they are not going to finish on time. Once the 8-hour bell sounds, work can continue, but points are deducted from the team’s total count, and these deductions can have a devastating effect on the country’s final score. 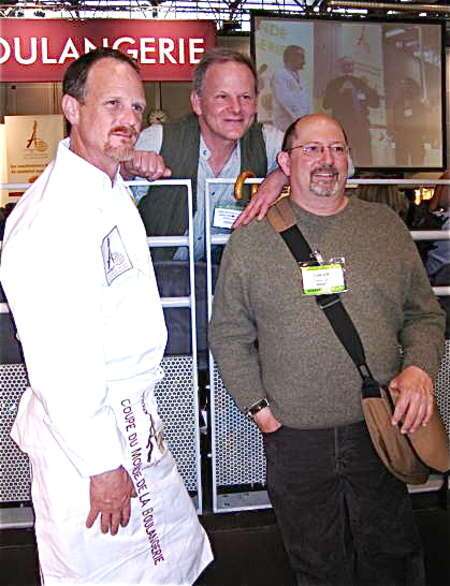 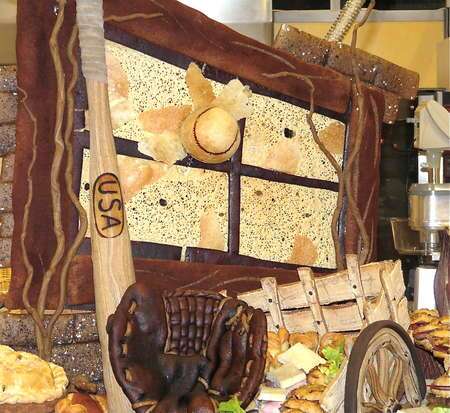 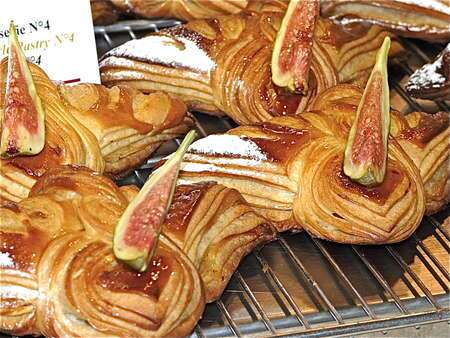 There were visible mishaps in the Japanese and American bakeshops during the final hours and, particularly among the Americans, a palpable sense of distress creased the competitors’ faces as the day neared its end. And in fact, the Americans, Japanese, and the Dutch did finish late, right up to the maximum time allotted for late finishing. The ominous consequence ensued—10 points would be deducted from the final score. 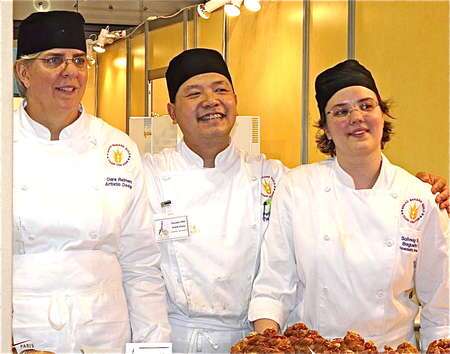 The American team—phew, all done!

Judging followed, a process of 2 hours or more, after which each country’s work was moved to a display area where the public could get good close views of everything.

March 30, Day Two
The next round of four countries showcased their talents—Mexico, Turkey, Taiwan, and Argentina. Another day fraught with some mishaps, and graced with some beautiful successes. The Coupe was a new event for these countries, and it was wonderful to see them offer their best breads and pastries, and their innovative artistic pieces. The Taiwanese, in particular, embodied an intent focus throughout the day, and functioned as a very tight team. Now eight countries had done their time; one day remained. 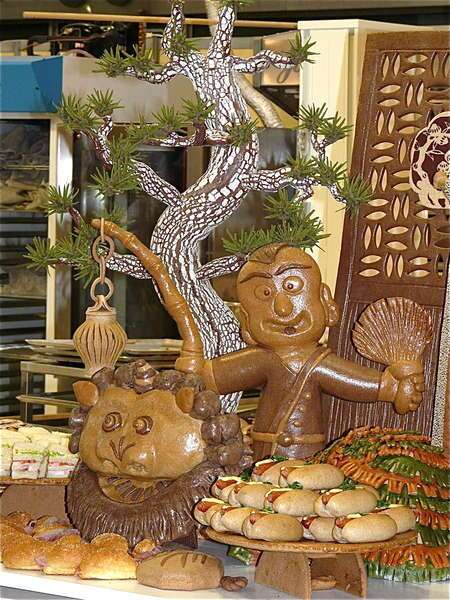 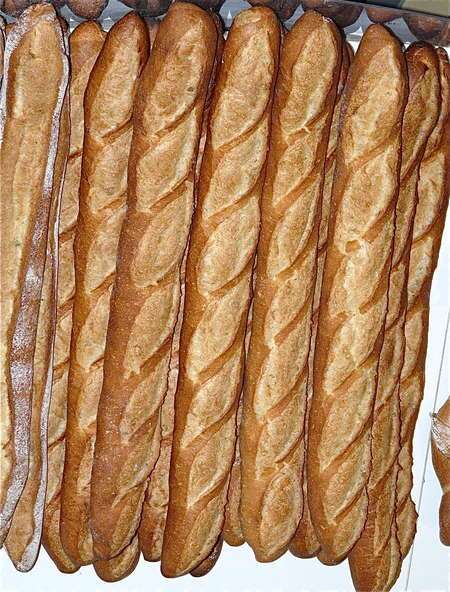 March 31, Day Three
Poland, Sweden, Italy, and Spain took the stage. As the day progressed, it was clear that the Coupe of 2008 was going to be one of the most competitive ever—there was so much strength revealed by so many of the competing countries. Predicting winners was certainly going to be difficult, and one had to commiserate ahead of time with the seven judges, who surely were going to have a very complex and difficult task.

As the day closed, one could now see the work of all 12 countries on the display stand. Clearly, this Coupe was a showcase of great and varied skills. The breads, the viennoiserie, the artistic design—what a marvel of sights! For the 36 bakers, the long-awaited exhalation was imminent, but not quite at hand: it wouldn’t be till the next day that the awards would be announced.

April 1, Day Four
Hundreds of spectators crowded the area in front of the ceremony—Poles and Japanese with their flags on high, Argentineans dressed in their national colors, French with whistles and horns blaring. Opposite, on the other side of the cordon were the judges, the team captains, various dignitaries, and 36 nervous and expectant bakers. To say all the bakers were winners simply for being there would be no understatement. Yet few would be completely content to hear that—better to hear the name of one’s country loudly and proudly called as one of the top three winning countries. And finally, the time for that announcement arrived. 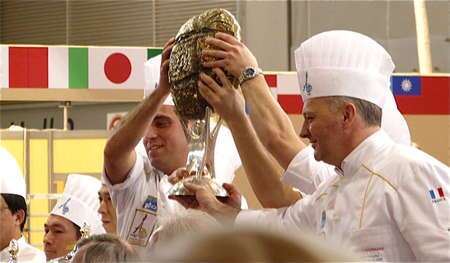 I hope the following is not a cliché: The Coupe du Monde is a competition, and the cumulative amount of time that has been invested by the 36 competitors (not to mention the hundreds of people who help them in one way or another over the months) is really not something that can be imagined. And being a competition, it’s inevitable that some people win.

The larger point is—no one has lost. Faces were sad, deflated, crushed, and the great majority of the competitors did not stand on the podium. No matter. All their lives have changed now, and the ways in which they have changed will be revealed over the coming years. No one has lost. 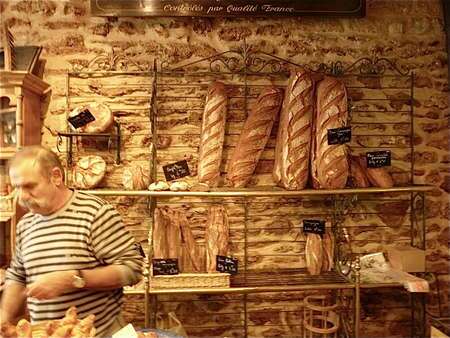 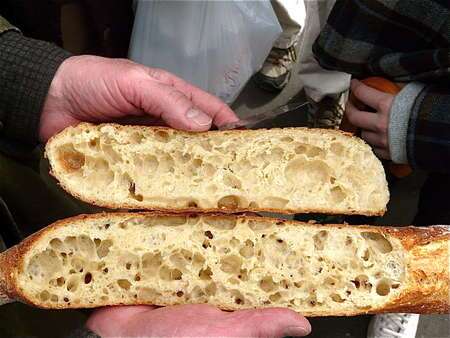 This is the first I have heard of this. /magnificent! My kinda competition.way better than being a football fan. I'll be seeing the home team via internet. In fact ,I think the whole thing should be on ESPN. I want to buy a team apron to show my support. Good luckin 2012.Can the team give training updates Well, when 2012 comes, we'll keep it in mind. King Arthur is a major sponsor of the team, so we do like to get them as much PR as possible - they really do work hard and represent our country well. - PJH
Man!!!! Just by looking at the pictures posted, there was an amazing amount of talent in France for the Coupe. Each country should be proud to have just competed!! I know I am!! As an aspiring and trained baker, it gives me hope that the the best are still using old world techinques along with New world gusto!! I can only hope to be good enough just to try out for the Coupe one day, when I "grow up"!
Thank you so much for this report and for the excellent photographs, which communicated so much of the mood and atmosphere. I thought the pastries were absolutely gorgeous-- inspiring, even. had watched the tryouts for the USA team at Camp Bread 2007, and had hoped they would enjoy the Coupe and perhaps even win again. That would have been nice, but it's also nice to compete in a world arena. Congratulations to everyone,
A wonderful "read"--brought back memories of my time in Europe & Paris--in 1974 while making my rounds from 1 "Haute Couture" house to another each day I often became side tracked by the aroma of baking bread---the bakers at that time were always interested in news from the USA & spoke of "Army bakers" they had met during the wars---1 gave me specific directions for making "corn bread" from the recipe of a GA corporal. I loved reading all the posts---Kudos to each & everyone in the competition.
Team USA'S artistic piece was whimsical, attractive, and ingenious-- what an accomplishment.
Jeff, thanks so much for bringing this amazing story to us. Bakers share a bond like no other in the world and I am so proud to be able to say "hey, that's my family!" Congratulations to all the teams!
Thank you so much everyone for everything - I learned more than I ever thought possible, met so many incredible people and as my aunt says, this truly was the experience of a lifetime. I wouldn't trade it for anything. The first morning in Paris, I sat on the bus to the Coupe surrounded by all these bakers and realized "whoa, I am one of 36 people in the entire world on this bus." That put everything in perspective. Each of us gave it our all - during the long months of practice and on the day itself. And I'm proud of what we achieved. Win, lose or draw, we did what we set out to do - individually we became better bakers, and collectively we have become a part of the Guild's mission for education. So thanks again to the multitudes who supported us. I am so honored to be a part if this all.
Thank you for this great story. My niece, Solveig, was a member of Team USA, and I know how hard the entire group worked toward this competition. I am sorry the US lost, but I know this has been an experience of a lifetime. The details in this article helped me understand the events over the span of BBGA, and I appreciate that since I was not lucky enough to travel to Paris with my Solveig and her family!
Gee anyone have any ideas if these bakers want to do an interview about the competition? Were there any stories behind the scenes?
This was magnificent to read: exciting, heartbreaking, invigorating and informative, conveyed with such a warm, humane voice. Thank you, Chef, for sharing this with us! Jen McAllister